Uncovering a
World Away

In "Intro to Game Design" —a Wintersession Industrial Design class at RISD— I learned a variety of game styles and methods for playtesting my own games. For my final, I designed "A World Away", a cooperative game where players navigate an abandoned town in search of tools that will help them fix their broken down car. 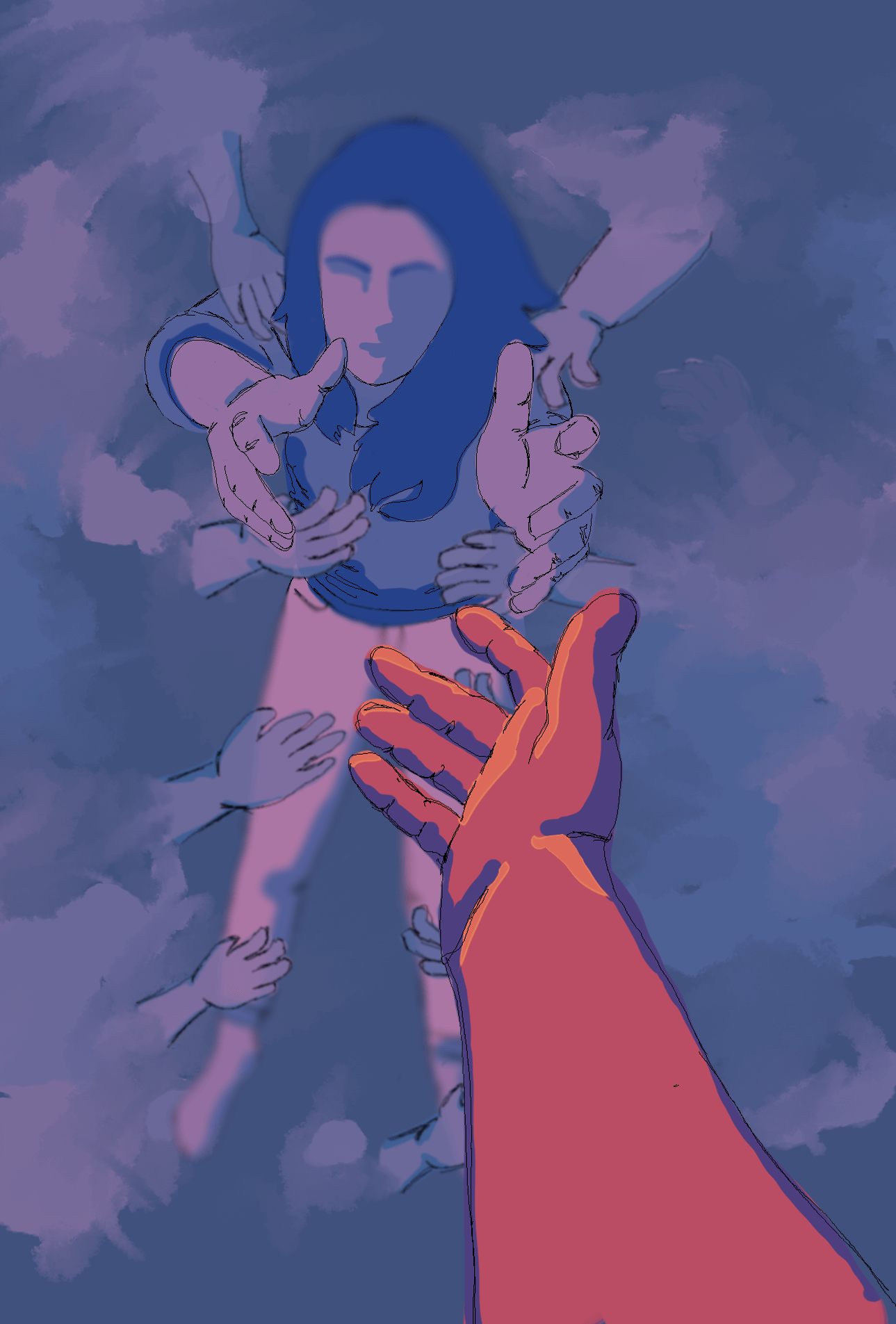 Some of the work from my Experimental Short Fiction class that I used as reference.
For this game, I wanted to explore collaborative game play through an embedded story experience. Around the time this class started, I had just learned about Dungeons & Dragons, and I was intrigued by the concept of improvisational play defined by both chance and rules. The previous semester I had also taken an experimental short fiction class, and I was curious to see how the narrative media I created then could be extended to game play in this class.

For this game, I wanted to explore collaborative game play with an embedded story experience. I had learned about Dungeons & Dragons around the time I started the class, and I was intrigued by the concept of improvisational play that was defined by chance and rules. The previous semester I had also taken an experimental short fiction class, and I was curious to see how the narrative media I created could be extended to game play. 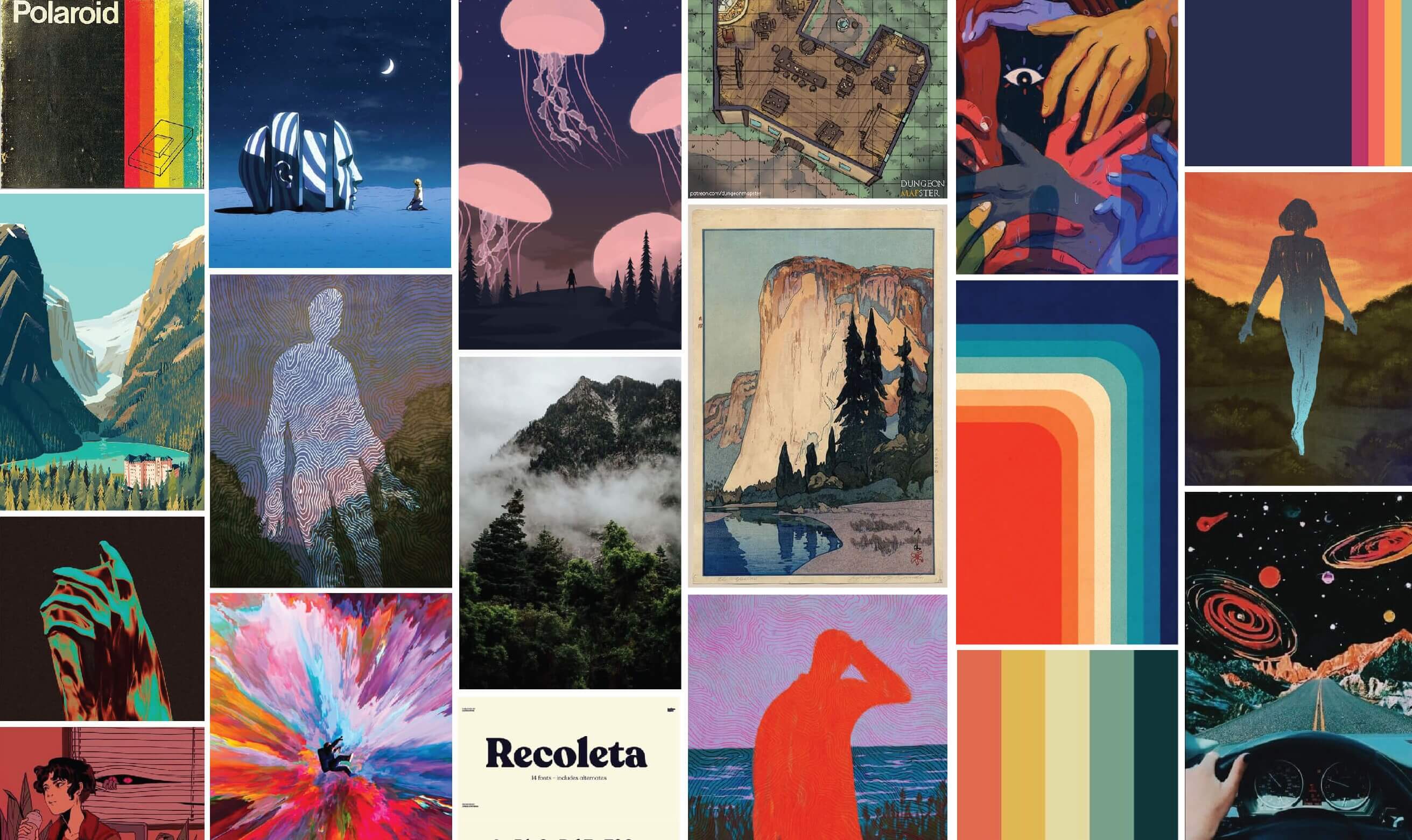 A mood board using images pulled from Pinterest for visual inspiration for the game design. I was strongly inspired by vintage board games and wanted to convey a sense of retro mysticism in my final design.

My initial ideas were heavily influenced by common tabletop Roleplaying Board Games, such as Dungeons and Dragons. The basic premise of the game narrative revolved around a seemingly odd group of locals (the players) uncovering the mysteries at the heart of their small mystic town by exploring the game board.

When gauging the concept for responses from playtesters, I often used the following blurb: 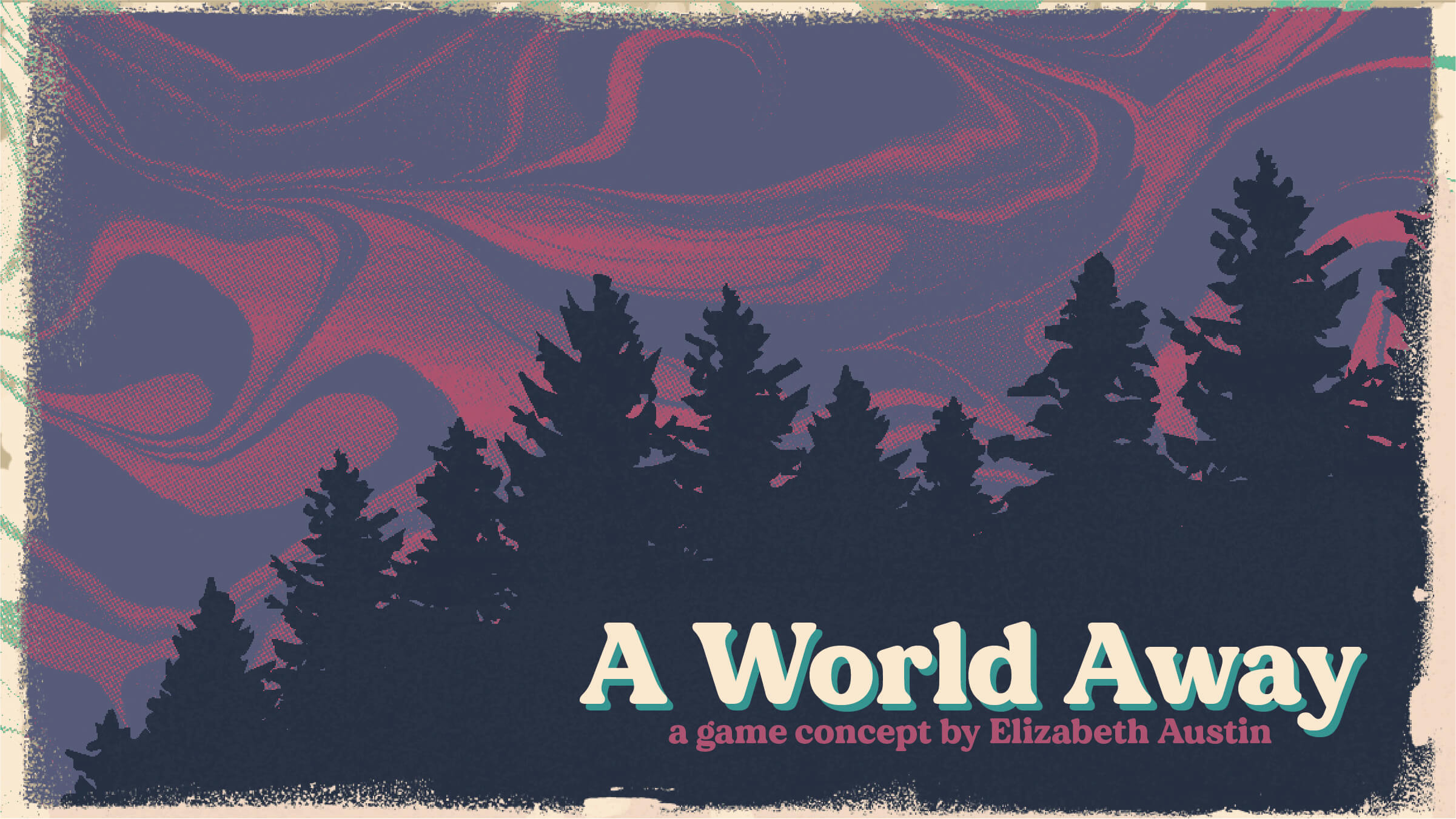 The board game cover I used in presentations when discussing my concept. I tried to convey the feeling of a board game that was hidden away for several decades, like Jumanji.

In a small coastal town, supernatural mystery lurks behind every corner…

Harbour Heights has always been known for its peculiarities, especially after the Great Blizzard of ‘99. Mystic sightings are constantly being reported by residents and tourists, and they permeate the lore of the town.

You have recently been thrust into one of the large conspiracies at the heart of Harbour Heights, and it’s up to you and a ragtag group of townspeople to figure out what’s been going on. 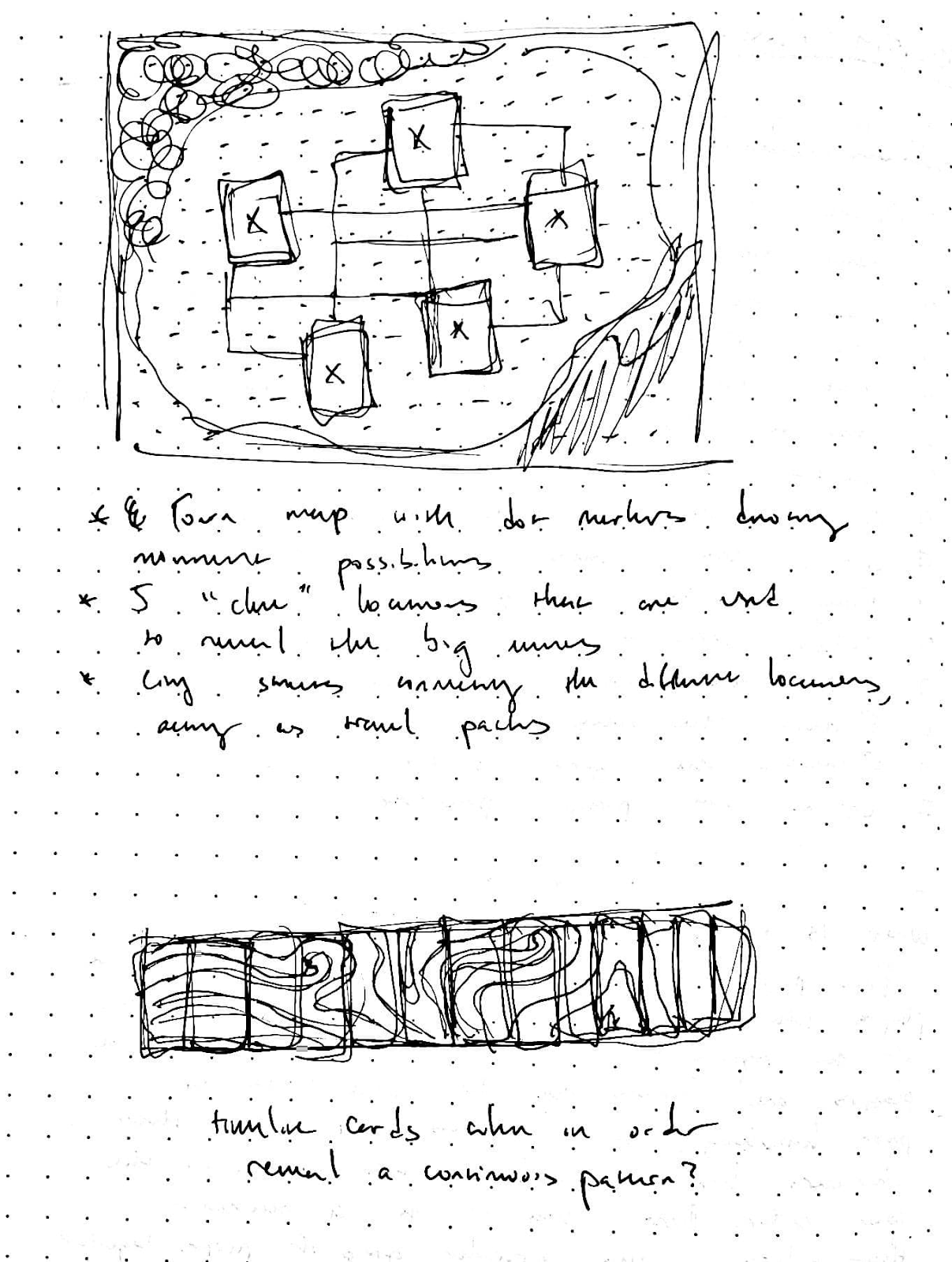 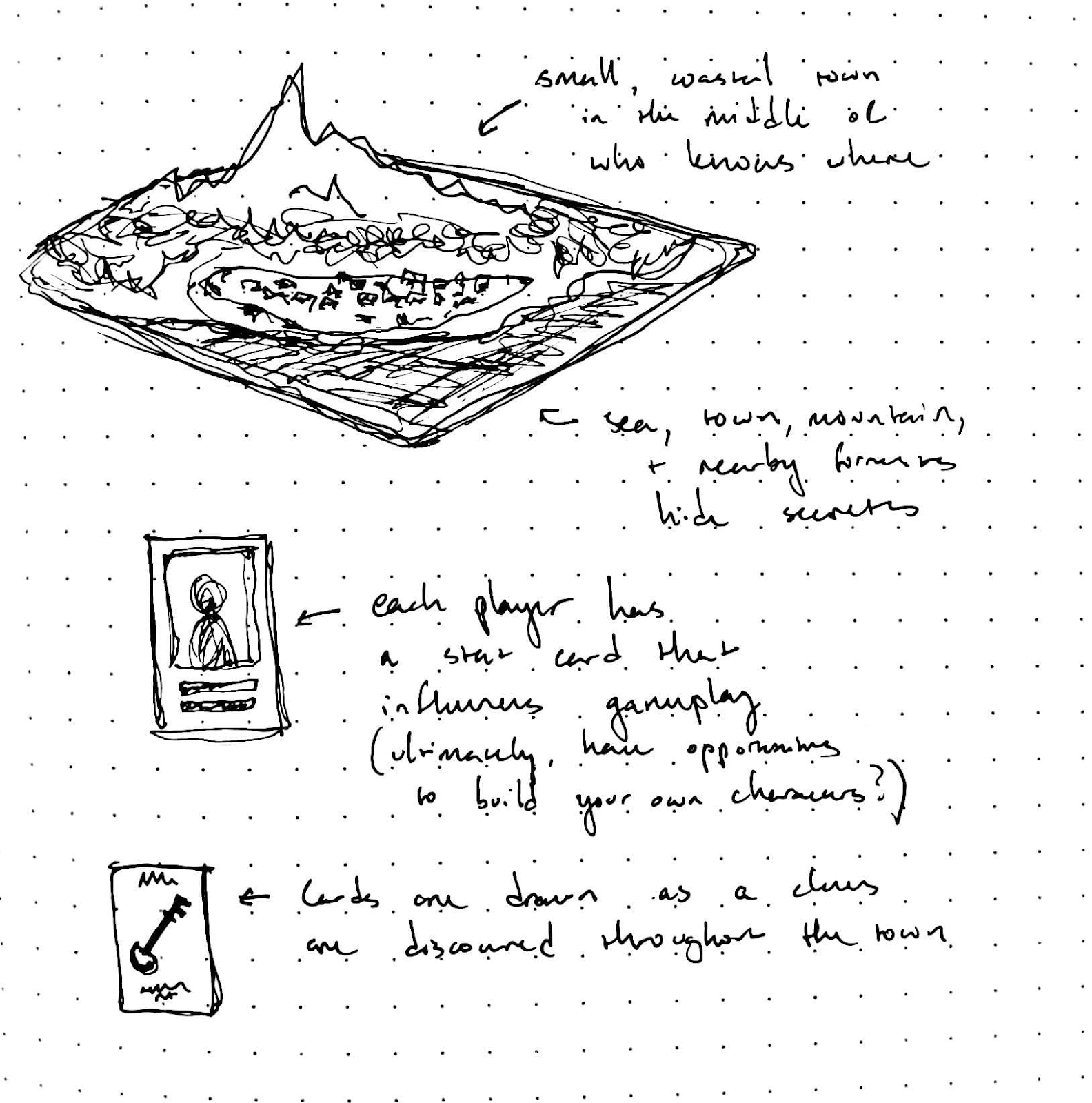 Sketches of possible game board and character card layouts. These were pulled from 30+ pages of handwritten research and observation.

I primarily drew inspiration from games such as Pandemic: Legacy and Betrayal at House on the Hill were structured. My initial concepts relied on players exploring the board to visit different parts of the town to gather clues that would help uncover the "big mystery". Different cards would reveal different encounters and challenges, and players would use their character skills as well as group cooperation to tackle each problem.

I always knew this was going to be an ambitious game design, especially for a five week class, but my biggest concern was replayability. A mystery built into the actual components of a board game can only really be solved once. Replayablity was an important factor in the game design to me, so I ultimately decided to move away from character abilities and embedded storylines and focus more on board exploration as the primary game mechanic. 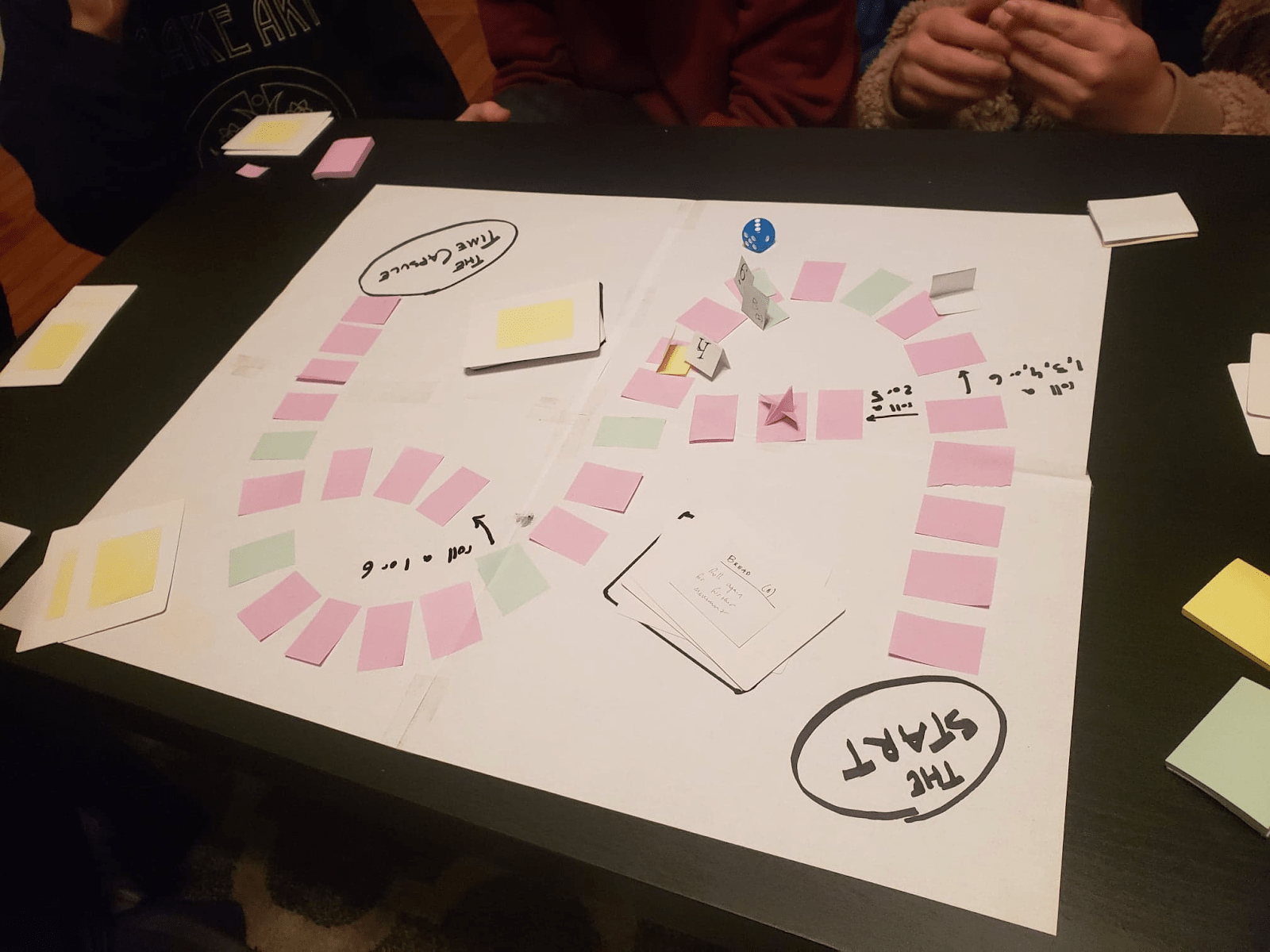 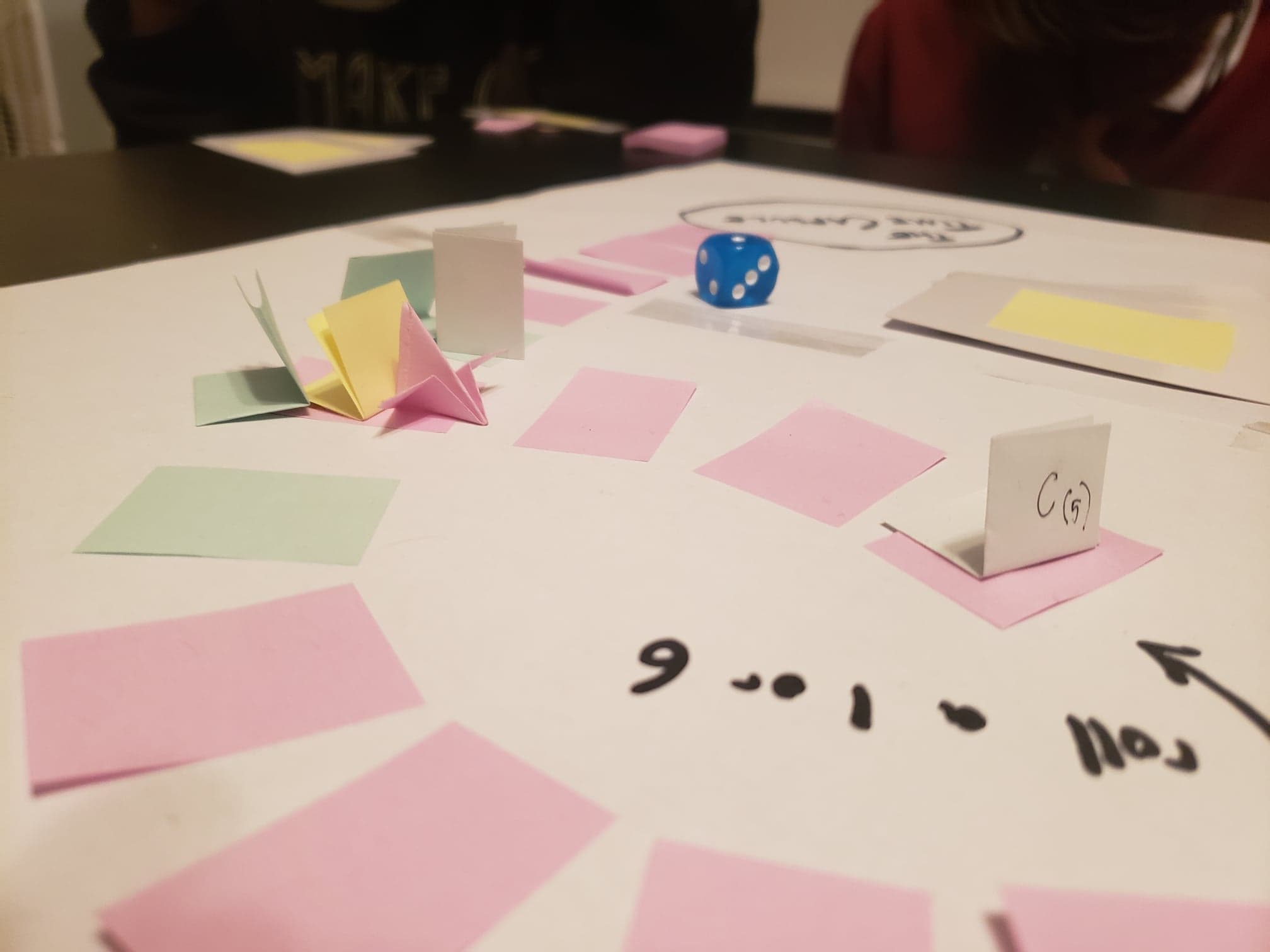 Snapshots from a playtest session of the first version of "The Generic Game", which served as part of the foundation for my final game.

Unfortunately, I had a personal emergency come up halfway through the class, and it impacted my ability to test multiple iterations of my game. However, I was able to pull observations from other playtests I had conducted earlier in the class.

One of the games I worked through several iterations of was "The Generic Game"— a game set in A Small American Town where the Good Guys battle the Bad Guys over ownership of local landmarks. Notable mechanisms in this game included randomly drawn cards that grouped players as either Good Guys or Bad Guys, a board that can be explored in any direction, and Object Cards that had special properties which could only be activated by rolling a certain number on a die.

When I playtested this game, the main feedback I received was that the stakes did not feel high enough and the Object Cards did not have a lot of narrative tie to the rest of the game. I decided to focus on this feedback while developing "A World Away", which was my final game. 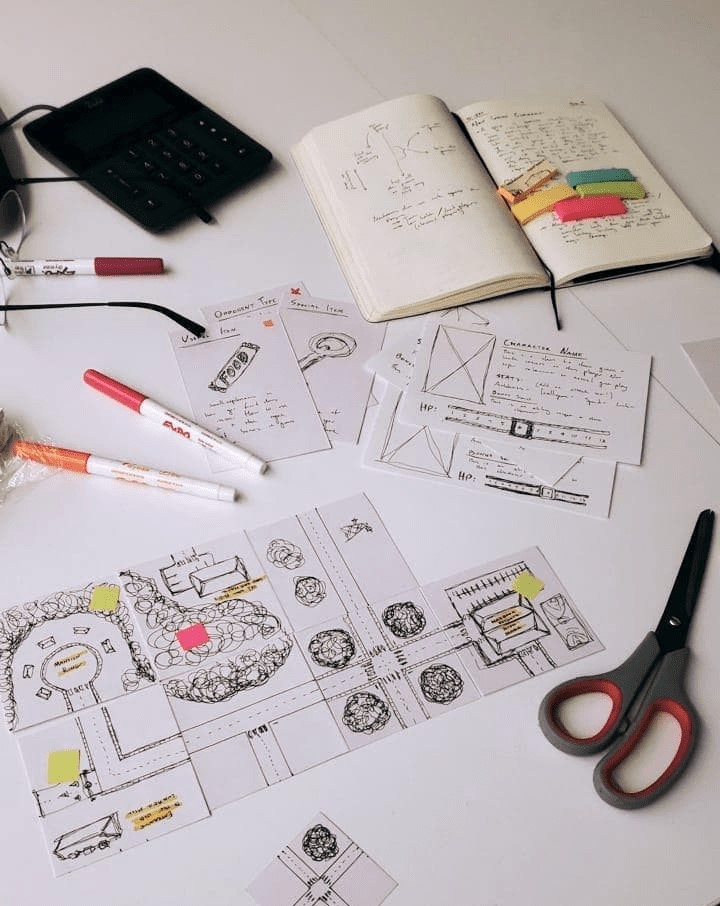 Prototypes for the final card designs. The goal of these prototypes was to determine the different types of cards that would be needed and the essential information each one should convey.

When I decided to shift away from an RPG game to a tile-based game, I looked to Carcassonne for inspiration. I was captivated by the countless ways the land tiles could be arranged while still abiding by a set of governing rules. I also thought the design of the land tiles would be a fun challenge to replicate. While I wasn't able to explore extensive narratives and hidden storylines,  I was still able to embed some of the elements from my fiction class by focusing on game material presentation. The tile-based game mechanism I chose also shared some commonalities with the open-ended board experiences I explored in my initial concepts. I was also very excited to experiment with the visual design of the game cards, especially since I didn't have a lot of opportunities to develop my graphic design abilities. Capturing a strong sense of mystique was integral to the narrative I wanted to create, and the visuals were going to help make up for what I was not able to accomplish through storytelling. 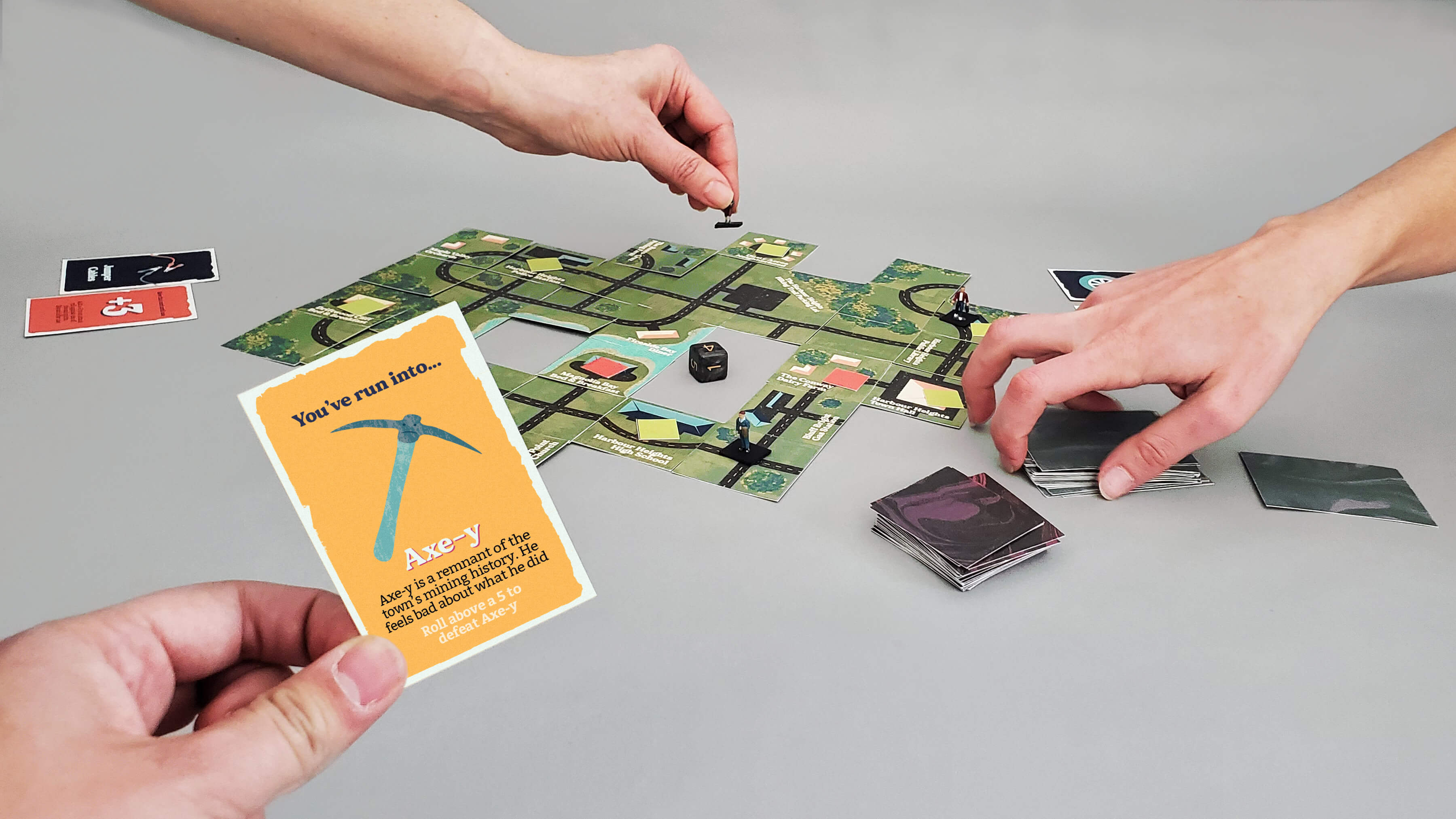 Pictured above is an example of "A World Away" being played. This is one possible board layout based on how the Town Tiles were drawn. 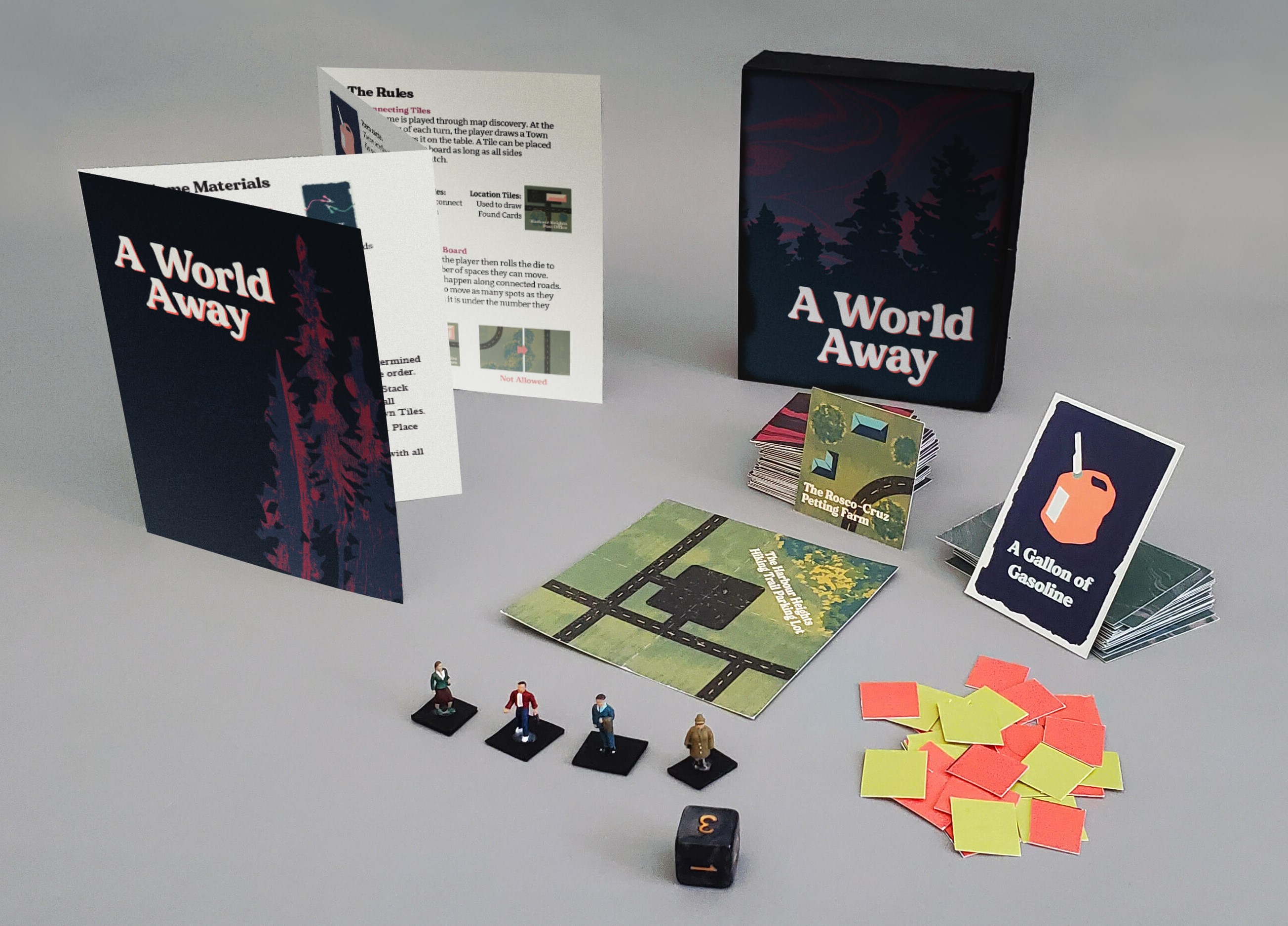 All of the game materials, including the instructions booklet and game box.

The final concept of my game "A World Away" is a tile-based game where the players must work together to find three items (a gallon of gasoline, jumper cables, and a spare tire) in order to escape the haunted town of Harbour Heights.

Below is the updated game narrative and introduction to the rules:

The game is played by connecting town tiles together so that there is at least one continuous road players can use to navigate around. Each turn begins with a player pulling a town tile from a face-down deck and determining where the best place to put it will be, making sure that it connects to one of the roads already on the board and that the other sides match nearby cards if necessary (roads must line up with roads, trees with trees, etc). The player then rolls a die which determines the maximum number of tiles they can navigate across. If a player comes across an unmarked location tile, they are able to draw a Found Card. If a Sad Spirit is encountered, the player must roll higher than the number stated on the card in order to defeat it. If the Sad Spirit is successfully defeated, the player places a green territory marker on the Location Tile and it is safe for other players to navigate across. If the player does not defeat the Sad Spirit, a red territory marker is placed and the tile can no longer be used to navigate the board. The game is lost when there are three red territory markers on the board. 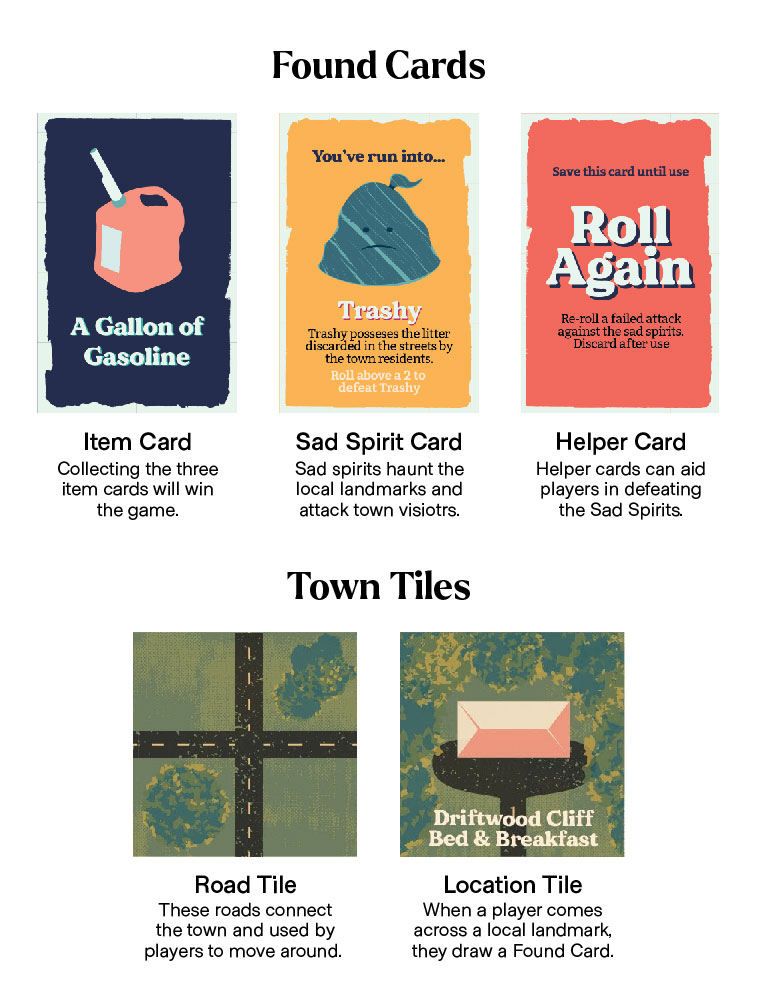 Overview of the different types of cards used in "A World Away".

You and your family are driving through New England for one of your annual bonding attempts when you come across a road closure in the middle of a densely forested area. You try to look up alternate routes, but there's no service on your phone. But no need to worry just yet­—there are detour signs pointing to a small town called Harbour Heights.

As you approach the town, an eerie mystique looms in the air. Harbour Heights looks like any other small coastal town but one thing sticks out: there's a dead silence ringing through the air.

Harbour Heights is a ghost town.

As you and your family look for signs of life, you hear a BOOM and realize your tire has gone flat. You pull off into the parking lot of a small hiking trail just in time to see your fuel gauge drop to empty and notice your car battery die.

Now, it's up to you and your family to explore the town and find the items you need to get your car working again. There are two problems, though. You don't have a map of Harbour Heights and don't know where anything is, and even though there's not a soul in sight, some­thing dark and... sad? is lurking in the shadows... 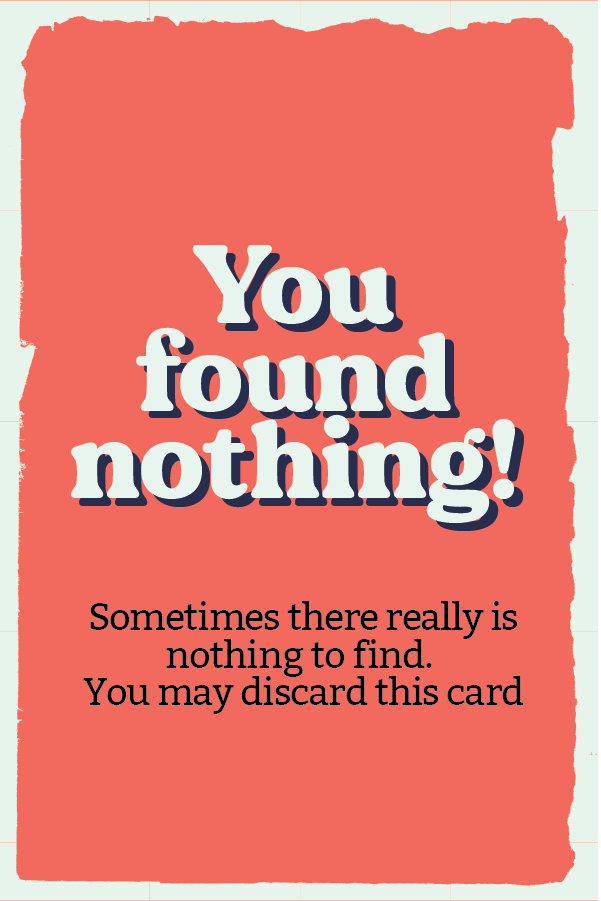 Overall, I loved this class and I wish it had continued on for more than five weeks. While I wasn't able to accomplish everything I had hoped for with my final game design, it was still a game that elicited positive responses. If I were to continue working on this game, I would develop the Sad Spirit encounter mechanism further by trying out some more RPG-styled mechanisms. The visual design also received a lot of positive feedback, with the only criticism being that sometimes is was difficult to tell the different figurines apart.

One aspect of this class that I truly appreciated, however, was taking work from other projects and redefining and redeveloping it further. I loved pulling from my fiction writing class, and working on this case study has resurfaced those feelings. I plan on taking my experiences from these two classes to the next level by creating an interactive web-based story. Keep your eyes on this website for more updates in that regard...